The City of Cincinnati has hundreds of murals displayed across the city. From historical to contemporary, the murals all have a unique story to tell. Most of the murals painted across the city are from ArtWorks, an award winning non-profit that employs students and local artists. Along with their three programming areas, ArtWorks focuses on public art, like murals around the city. Here are five beautiful murals to see, four coming from ArtWorks. 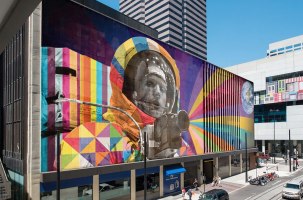 Brazilian street artist Eduardo Kobra created this contemporary mural in partnership with ArtWorks. The mural is painted on the Fifth Third Bank Headquarters building downtown at 511 Walnut St. The colorful mural pays tribute to Ohio native Neil Armstrong, the first man to walk on the moon. (Photo courtesy of Artworks).

The mosaic murals located in the rotunda of the Union Terminal building are a staple of Cincinnati. The intricate murals were designed by German artist Winold Reiss and took roughly two years to complete, Union Terminal officially opened in 1933, and the mosaic murals depict the history of Cincinnati. Though many of the original murals have been relocated to other buildings in the Cincinnati area, such as the Cincinnati/Northern Kentucky International Airport, five murals still remain at Union Terminal, which houses the Amtrak station and the Museum Center. (Photo courtesy of Decopix).

3. Garden Party at the Taft 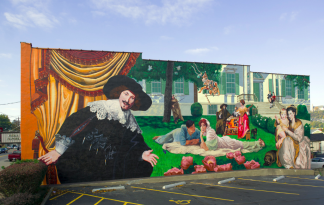 This ArtWorks mural is reminiscent of the permanent art collection at the Taft Museum at 316 Pike St. downtown. The mural combines A World of Their Own by Lawrence Alma Tadema, Mrs. John Weyland and her Son John by Joshua Reynolds, Portrait of a Man Rising from his Chair by Rembrandt Van Rijn’s, Edward and William Tomkinson by Thomas Gainsborough, and The Song of Talking Wire by Henry F. Farny to make one mural. The mural was done in partnership with the Taft Art Museum for their 80th Anniversary in 2012. (Photo courtesy of Artworks). 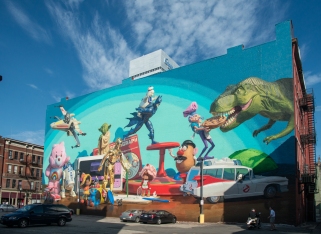 This mural celebrates the Cincinnati-based toy company, Kenner Toys. The mural is located on the Town Properties building on W. Court St. Local artist Jonathan Queen, with help from ArtWorks apprentices, designed the nostalgic mural. Some of the beloved toys featured in the mural are Mr. Potato Head, R2-D2, Ghostbusters, Play Doh, and many more. (Photo courtesy of Artworks).

This six-panel mural is located on the Duke Energy electric substation on Central Parkway. The murals were painted by ArtWorks in partnership with Duke Energy & Duke Energy Foundation. Tim Parsley designed the six antique light bulbs along with help from youth apprentices, including McNicholas senior Molly Jorden.