Christmas decorations seem to be appearing earlier and earlier each year. It’s said to be the most wonderful time of the year, which is celebrated with friends and family with hopes for a blanket of white on Christmas day, but when is it appropriate for Christmas to take over the corporate world?“Mid-November. People get upset that it’s early but they need time to advertise and people need to buy things before things get busy,” senior Nick Russell said.

Stores like Hobby Lobby and Michaels are begin displaying their Christmas decorations in July, giving Christmas in July a whole new meaning. Representatives from both stores said they do this for those who participate in Christmas craft shows. This way crafters have the appropriate amount of time to prepare everything in time for Christmas.

“I start decorating after Thanksgiving…. also it is never too early for Christmas I am already listening to Christmas music” freshman Kelly Carville said.

Stores like Target, according to their Facebook and Instagram sites, start to release Christmas decorations and clothes within the first week of November. However, according to a recent poll conducted by The McNicholas Milestone, 86% of the 74 students who responded said they decorate after Thanksgiving.

“I think stores should put up decorations around mid-November so people can buy them and decorate their own houses and have them be up long enough for people to enjoy before they need to be taken down,” freshmen Carly Weidenbacher said.

Social studies teacher Randy Royal decorates his classroom in early November. He said he decorates early so there is enough time to enjoy the Christmas decorations. “There’s only two weeks until Thanksgiving break, then about two weeks, then Christmas break, so if I wait there’s not enough justified time,” Royal said.

“I quite honestly believe that if Christmas makes you happy, which is what the holiday tries to do, then why not be happy all year. But sadly my family doesn’t feel that way, so [we don’t decorate until] December,” senior Aidan Guessford said.

According to Alexandra Richards, people who put out Christmas decorations early are happier. In her article on businessinsider.com, decorating early “can improve your mood…Psychoanalyst Steve McKeown explained…that decorating for Christmas brings up feelings of nostalgia.” 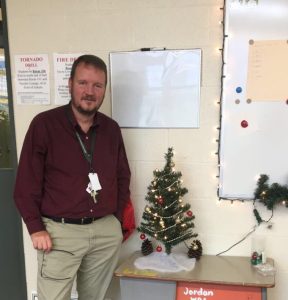 Social Studies teacher Randy Royal said he decorates inside his home in early November and leaves the dining room Thanksgiving-themed. He added that he decorates his classroom within the first week of November so there is enough time for everyone to admire it.