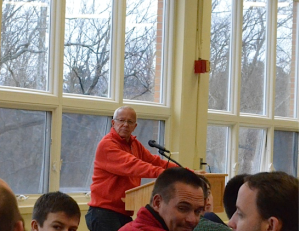 On Feb. 1, Marty Brennaman, Cincinnati Reds Hall of Fame member and the voice of ‘Reds on the Radio’, visited McNicholas as the guest speaker for the annual Father-Son Breakfast, sponsored by the PTSA. He spent his time talking about Anderson Township, his children, and the Cincinnati Reds to over 80 families in attendance. He gave predictions for the upcoming season, as well as giving key points for the Reds to succeed in the 2015 season. Sophomore Jonathon Hazzard said the whole experience was very enjoyable.

“In general, I really enjoyed the breakfast.” Hazzard said. “The food was great, it was a good time listening to Marty Brennaman, and it was a good time bonding with my dad and brother.”
Brennaman’s son Thom is also a professional broadcaster, and has spent his career working for FOX, including calling national games for baseball and football, and working as the play by play caller for the Chicago Cubs, Arizona Diamondbacks, and finally the Cincinnati Reds. One famous Red had high praise for Thom.

“Pete Rose always used to say ‘he’s got some great bloodlines,’” Marty said. On their relationship, Marty said it is not a traditional father-son relationship.
“We’re really more like brothers in our relationship,” Marty said. “I’ll never give him any advice unless he asks for it.” He said he never once pressured his son in the direction of broadcast, always leaving it up to him to decide his future plans.

“One day, we were in the car, and he calmly told me that he wanted to go into broadcasting,” Marty said. “I never pushed him in that direction; he decided it on his own.” Brennaman had high praise for the Anderson Township area as well.

“I never have lived somewhere that I’ve liked so much.” Brennaman said. “I’ve had the opportunity to move to other places, and I’ve never wanted to because I don’t think I can do much better than this.”
He spent the remainder of the breakfast discussing the upcoming baseball season, followed by a Q and A session. There was then a Reds’ trivia game for door prizes, and pictures and autographs with Brennaman. Hazzard said that this year’s breakfast did not disappoint.

“I was expecting it to be similar to last year’s breakfast,” Hazzard said. “but I found it to be much better, both the food and speaker.”