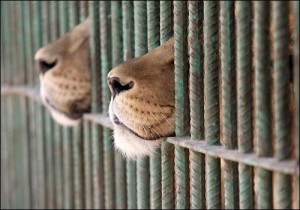 During a recent field trip the local zoo with my classmates, I found it especially difficult to concentrate on my assignment for the day when I was confronted by the lost, tired gaze of an orangutan in the African animals exhibit.  While my fellow classmates snapped their pictures of the animal, many of them failed to notice the evident depression exuded in both appearance and emotion.  Throughout the day, the orangutan snacked on her cheerios handful by handful while gazing into the eyes of her audience while residing in her dark enclosure.  Many other animals exuded the same deflated characteristics through anxious activities like “weaving,” an unnatural act of nervousness and boredom in which animals, like elephants, move their heads back and forth in a swaying motion, an act not seen in the wild, but is developed by animals in captivity over time. Zoos characterize these behaviors as “just bad habits.”  While first seeing the elephants in the morning, their weaving had already started.  When my group passed them again in the afternoon, the weaving was still taking place.  In the same spot.  For hours at a time.

Imagine your life — all of the things you’ll accomplish and all of the different places you’ll go, along with all of the different people you’ll meet. Now picture the elephant mentioned before.  In the time it will take for you to have lived your life with all of its exiting adventurous, those elephants at your local zoo will have most likely spent all of those same years in the same spot of their enclosure with the same other elephants, day after day, year after year.

Leaving the zoo only left me with a few thoughts: Why do we believe the best way to study and recreationally observe these exotic animals is through housing them in “habitats” nearly eons away from that of the ones they would naturally reside in, and not only that, but do so while they obviously experience depression and anxiety?  How much does the zoo actually contribute to the well-being and reviving of endangered species in the wild? Is housing these endangered species really helping them?

Though my personal view of zoos is swayed negatively, I have to acknowledge the positive aspects and benefits of maintaining zoos.  While browsing through websites arguing for zoos, several constant ideas and points were made. Zoos work towards helping to revitalize endangered species as well as to initiate a relationship and interest of those endangered species in zoo visitors, especially children. However, according to the website About News, the majority of breeding programs don’t rehabilitate animals back into the wild.  The animals bred are forever kept in zoos, being sold and constantly exploited.  In addition, removing animals from the wild and moving them to zoos diminishes the genetic diversity of that animal in the wild, making their odds of revitalization in the wild even lower than they are now with poaching and destruction of habitats.  On the idea of establishing relationships and interest in zoos and their animals, this can be combated with the point of the ability for people to visit sanctuaries housing many of the same animals seen in zoos.  Not only that, the habitats created for animals in sanctuaries closely resemble those they would reside in naturally in the wild, only with scientists closely observing them to study their habits in what I believe to be a much more valuable way of attempting to revitalize those endangered species.

Located in Zanesville, Ohio, the wildlife sanctuary, The Wilds, gives visitors the opportunity to see animals such as giraffes, rhinos, camels and antelopes.  These animals can be viewed by vehicle during safari tours, ranging from $15-$20 per person, through zip line tours at a cost of $84 per person, or through horseback riding safaris costing $30 per person.  The Wilds shares their global impact on their website, which shows the projects they fund such as Lions in Kenya, Polar Bears in the Artic, and Wildlife Rescue in Guatemala.

No matter a person’s stance with zoos, one thing is certain though; we all need to express these opinions and ideas.  Otherwise, things will remain the way they are.  Should zoos be maintained or destroyed?  Comment below.