A common staple of American culture and cuisine is the fast food industry. With different establishments drawing from different culinary types and styles, fast food can provide quick, easy, and diverse meals. One food component to this industry in Cincinnati is chili. Two of Cincinnati’s signature chili fast-food restaurants are Skyline and Gold Star, and debate is constant among Cincinnatians as to which is superior. This month, as a new year special, The Milestone sent staffers Faith Miller and Nicholas Wynn to test the two Cincinnati staples. 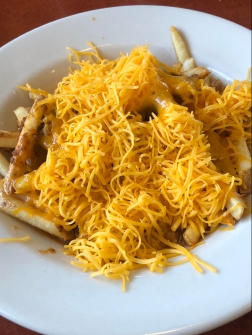 Miller – Skyline is most known for their special chili: a blend of meat with a sauce that includes hints of chocolate and cinnamon. However, when tasting it for myself, I couldn’t really taste the chili at all. While eating my cheese coney, I noticed that the main ingredient on it was cheese. I didn’t think much of it at first since it has the word ‘cheese’ in the name of the dish, but, when trying the chili cheese fries, I took the cheese off to get a better idea what the chili would taste like. To my surprise, it was actually somewhat hard to even get the chili on my fry because it was so watery. After many attempts, I finally had some chili on my fry. The chili just kind of fell apart in my mouth and had no real taste to it. After trying it the way it was intended, I concluded that the main ingredient that gives it its flavor must be the cheese. Other than the food, the service was great. The server was very nice and had even asked if we would want some drinks to go when we leave. Because of all of this, I give Skyline a 5/10. 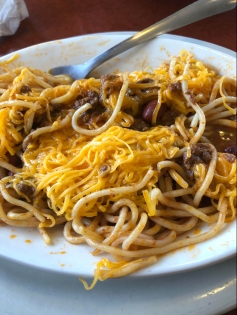 While Skyline wasn’t the worst chili I’ve ever had, it certainly wasn’t the best either. The chili had a weak flavor, leaving the cheese to cover most of the food’s taste. Because of the lack of spice, the chili tasted almost empty. It was also overly chewy, which isn’t the best texture for chili to have. The other main complaint about the chili was that it was thin and watery. Most of the chili would sink to the bottom of the bowl, and there was always a pool of juice left at the bottom, enough to eat with a spoon. The chilito I tried leaked because the chili was so thin. It tended to fall apart as well, but good chili should be thicker and not so watery. Basically, the chili seemed more like canned chili than a chili made from a special recipe. The only food that Skyline chili would work well on is Skyline chili dip, where the chili acts more like a sauce. In general, I would rate Skyline a 5/10. 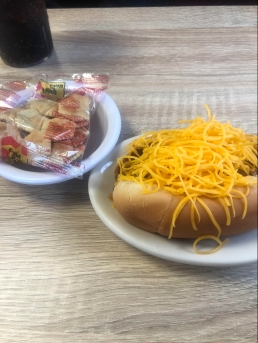 Miller – Compared to Skyline, the Gold Star experience was more positive. At Gold Star, I had ordered once again, a cheese coney. Gold Star’s chili consistency was clearly different; it was noticeably thicker. Even the taste was different. Compared to Skyline, Gold Star actually seemed like it had flavor in its chili whereas Skyline didn’t have much flavor. Because of the chili not being overly watery, you could actually tell that it was chili rather than an odd chili soup and could eat it without it spilling out too much. Due to this experience, Gold Star deserves an 8/10.

Wynn – Gold Star was certainly the better of the two chili parlors. First of all, the chili had a strong, 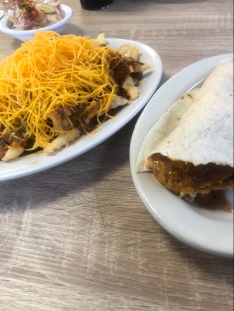 distinct flavor that was especially recognizable as Gold Star recipe chili. It had a certain spice and tasted much more filling than Skyline. Gold Star had a meatier taste, letting the chili taste more real, like it came from a distinct, special recipe. Gold Star was much thicker than Skyline as well, and it had a better chili texture, rather than the soupy Skyline chili. There wasn’t nearly as much chili juice left in the bottom of the bowl when I was finished, and the chili burrito I tried at Gold Star wasn’t leaky. Instead, it was more stuffed, and the insides were thick instead of soggy. Because of all this, I rate Gold Star Chili a solid 8.5/10.

Overall, Gold Star was the clear winner over Skyline. It had a distinct flavor, and it was thick instead of watery. Skyline was just too watery and tasteless, and it fell apart too easily to be satisfactory.

One thought on “Food face-off: Settling the Cincinnati Chili debate”