A common staple of American culture and cuisine is the fast food industry. With different establishments drawing from different culinary types and styles, fast food can provide quick, easy, and diverse meals. However, can fast food beat a classic restaurant? Between a fast food stop and full-service restaurant, which has better taste, service, portions, and cost? To answer these questions, The Milestone sent staffers Faith Miller and Nicholas Wynn to find out. This month, they tested pizza at Dewey’s Pizza and MOD Pizza.

Miller – MOD Pizza has many different options of pizzas to choose from, allowing the customer to customize their picks, as well as make their own creation. For my choice, I chose their seasonal pizza, the Phoenix. This pizza has many different toppings such as white sauce, Italian sausage, arugula, asiago, roasted mushrooms, red peppers that I substituted with black olives due to it being out of stock, rosemary, and lastly a balsamic fig glaze to top it off. The crust was crunchy but not too much where it would be 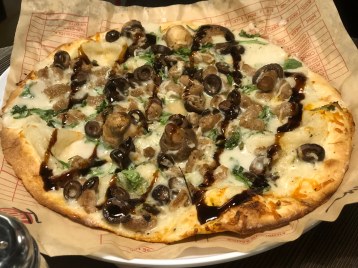 unenjoyable to eat. When it comes to the taste, it had me confused at first due to the different flavors all at once. It was somewhat of a strong taste due to the balsamic fig glaze, but that was to be expected. However, one thing that did throw me off was the use of whole mushrooms. Sure, they may not have been huge, but I’ve never really seen a pizza place put on whole mushrooms as compared to sliced mushrooms. I most likely would not get Phoenix again because of the strong taste; it’s just not for me. However, the lower price would make me eat there again and try out a different type of pizza. Because of this, MOD pizza deserves an 8/10.

Wynn – MOD Pizza just recently opened in Cherry Grove, but seems to already be growing understandably popular. The chain is best known for offering their pizza in a make-your-own over-the-counter bar style, similar to Subway and Chipotle, letting customers have exactly what they want. The selection is wide, ranging from a number of 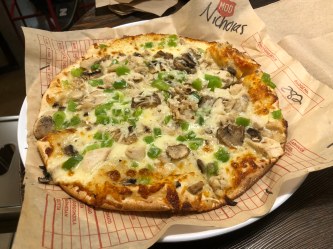 different cheeses, sauces, and toppings that’s greater than many other pizza places. They also offer pizza types that they’ve designed if you don’t want to make your own. The pizza I chose was topped with grilled chicken, mushrooms, and green peppers, asiago and mozzarella cheeses, and finished with pesto. All the toppings tasted fresh and blended well together without one overpowering the other – which is easy to happen with pesto. There were neither too few nor too many toppings. The crust wasn’t bad either, although it didn’t particularly stand out. I personally prefer thick and soft crust, but the thin and crunchy crust was tasty too. In addition, the prices were fairly inexpensive. An 11” pizza is just over $7 for unlimited toppings. A mini 6” is also available and this was plenty for me, paired with a side salad that was just as customizable as the pizza. For the great taste and great price, as well as the customizability and speedy few minutes in the oven, MOD Pizza earns an 9/10.

Miller – The pizza at Dewey’s Pizza is full of flavor, but at times can be overwhelming. Everything tastes fresh, but there can be way too many toppings. Sure, toppings are one of the most important parts of a pizza. The overabundant toppings made it hard to keep everything on the crust, and made it difficult to taste each topping properly.  I even folded the pizza in an effort to keep everything on. The crust was especially soft and enjoyable. 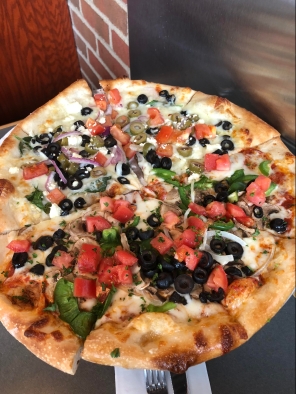 For what I could taste, it was delicious, and I would definitely go again if I was in the mood for restaurant-quality pizza over delivery. The price is a little high, so I would most likely not go there too often. Due to all of this, Dewey’s Pizza gets an 8/10.

Wynn – Dewey’s Pizza is a classic go-to pizza restaurant for obvious reason. They allow half-and half on any and all pizzas which makes sharing especially easy, as well as a unique menu of their own specialties. We chose to split a pizza, both sides being two different all-veggie types. All the veggies were fresh and the crust was exceptionally soft and thick. The main complaint was that there were a few too many toppings; they began to stack up too much and I couldn’t taste enough sauce and dough compared to all the toppings. It wasn’t so over-topped that the pizza was ruined though, so this a minor critique. Dewey’s was also the more expensive of the two places; most of their 11” pizzas are priced at $15 and some change. All things considered, Dewey’s Pizza earned a solid 8/10.

Overall, both Dewey’s and MOD has excellent and delicious pizza. Both are equally fresh and both were about equal in their higher quality. However, MOD Pizza narrowly wins over Dewey’s because of the easier customizability and the much lower price.