As societies have advanced, prejudices have been recognized as immoral, and are slowly fading out of mass culture. However, there is still one that has not begun fading, and that is ageism.

Ageism is prejudice based on a person’s age, and is unfortunately present in modern society, rooted in government. It isn’t as blatant as other prejudices because it is widely accepted as modern culture.

However, American government is based on the equality of all persons, and each person should be able to exercise equal rights. These rights are not always extended to children, though, despite being said that they still wield these rights. They do not have the full freedom to make their own decisions, and they have no way to express their opinions and provide their input into American politics and life in general. Despite being said to have their rights, young people truly do not have them if they can’t utilize them.

As a result of this inability to naturally express their opinions, a group of 21 people under the age of 21 have filed a lawsuit in federal court against the Obama Administration and fossil fuel industry. They claim that the government has not taken adequate action in addressing climate change, and as young people aged from 9 to 20, they will be the most affected and have the most to lose. They say that the inaction regarding climate change is a violation of natural rights.

Nick Venner, a 15-year-old plaintiff, told CNN in a Sept. 13 report that he thinks they have a chance of succeeding. “It’s hard for legal experts to deny the rights of young people. We are the future. They will be long gone before the long-term effect [of climate change] ever hits them. It’s about my kids. It’s about their grandkids,” he said.

Journey Zephier, another plaintiff in the lawsuit, has previous experience on a political stage. Documented by Occupy Hawaii and other Hawaiian organizations, Zephier testified in support of Bill 2491, a Kaua’i County pesticide disclosure Bill in Hawaii, in 2013 when he was 13 years old. Now a 16-year-old plaintiff on the climate case, Zephier told CNN in the same Sept. 13 article, “We are in a climate emergency. The federal government and fossil fuel industry have known for over 50 years that their actions and the burning of fossil fuels would result in destabilizing the Earth’s climate system.”

Regardless of how much the case focuses on ageism, its main concern is still the environment. For this reason, the case will likely fail. “[The case’s] efforts should be focused on change in Congress,” Social Studies teacher Randy Royal said. “The courts can’t enforce legislative action. The courts interpret legislative action.” In order for the case to have a significant impact, it needs to target legislation about the environment, rather than the execution of the already existing laws. “It’ll be an interesting experiment. However, in the long run, I don’t see it going very far. Had the argument been filed with a [Washington] D.C. court [instead of federal court], it probably would not have gotten past the initial hearing,” Royal added.

While it is recognizable that younger people don’t have the life experience of adults, they aren’t helpless. They simply need to learn, and they need to be presented with the opportunities to gain the experience they ought to have. However, they are often overprotected, and this protection smothers them, stifling their ability to make their own decisions. Younger people need, deserve, and do receive certain special protections, but these protections walk a line that inhibit the active use of the rights they are promised to have. There is no consequence to more opinions and more input in a civilized society, so all opinions from every person ought to be welcomed. 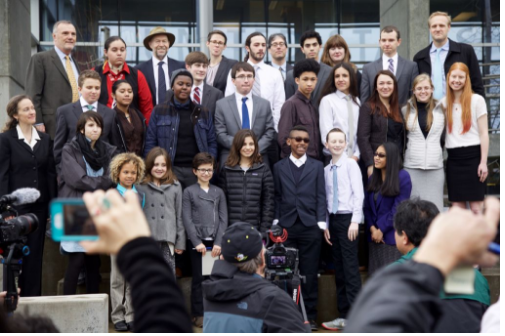 The 21 young plaintiffs in the case against the Obama Administration each have personal experiences contributing to reasons for wanting to join the case. They range from a struggle to take skiing trips to a family horse dying from drought, according to CNN. Other plaintiffs joined the case because they already had experience on a political stage according to MSNBC, such as 16-year-old Xiuhtezcatl Martinez, a known climate activist, member of Obama’s youth council, three-time speaker at the United Nations, and leader of Earth Guardians, a worldwide conservation organization. (Photo courtesy of Clayton Aldern/Grist and billmoyers.com)

The Environmental Protection Agency is named in the climate change lawsuit brought by 21 young people under the age of 21 against the Obama Administration. A spokesperson for the EPA told MSNBC the agency concurred that the government has “a moral obligation to leave a healthy planet for future generations.”