A common staple of American culture and cuisine is the fast food industry. With different establishments drawing from different culinary types and styles, fast food can provide quick, easy, and diverse meals. However, can fast food beat a classic restaurant? Between a fast food stop and full-service restaurant, which has better taste, service, portions, and cost? To answer these questions, The Milestone sent staffers Faith Miller and Nicholas Wynn to find out. This month, they tested Mexican cuisine at Los Cabos Mexican Grill and Chipotle.

Miller – At Los Cabos, because it was just two of us, we had been quickly seated rather than having to wait. The complimentary chips and salsa were okay; the salsa did seem to miss some sort of flavor that it really needed and the chips could use some salt, but it’s hard to complain since it was free. As for the queso, it could be just a little thicker, but other than that, it tasted great and didn’t have a weird lumpy consistency. For the main meal, I had ordered the Burrito Especial with steak. Inside the burrito was mainly steak, rice, and refried beans. The steak itself was packed with a lot of flavor, enough that a person could

eat it by itself, outside of a burrito. I normally hate eating refried beans because of the texture and normally restaurants put way too much in the burrito. However, Los Cabos clearly knew what they were doing since it wasn’t overbearing. Because I had such a great experience, I would have to give Los Cabos an 8/10.

Wynn – Los Cabos had surprisingly quick seating and service, especially considering that we dined on a Friday evening corresponding 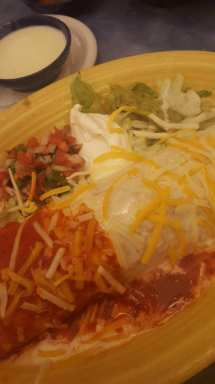 with Dia de los Muertos, Day of the Dead, on Nov. 3. Their complimentary chips were absolutely perfect, coming out warm and crunchy and not overly salted. The complimentary salsa had a nice kick to it as well, especially in aftertaste, but it lacked much substance and was a little too thin. The queso dip that we ordered for the chips was also relatively good. It was warm and cheesy, like real queso, but was runnier than it should have been. The entrée, the Grande Combo Burrito, was absolutely delightful. The red enchilada sauce had the perfect spiciness, and the refried beans had the ideal, moderately creamy consistency. The guacamole was fairly basic with a splash of too much lime, and the rice was relatively unflavored, acting more as a base. However, this let the meat of the burrito show off its flavoring. The chicken had a strong and natural taste, not smothered in spices, and the beef was cooked to melt in your mouth. The pico de gallo and lettuce also tasted especially fresh and crisp. Overall, the salsa, queso, and guacamole could have had slight improvements, so Los Cabos earned a solid 8/10.

Miller – At Chipotle, the line was somewhat long by the time we had gotten there. It took an even longer time for us to receive our food. While we were in the middle of ordering our food, it was so loud that even the worker had to ask multiple times what I was trying to say. This might be fine in bigger places, however in a small area such as Chipotle, it becomes so irritating that I would much rather eat somewhere else in peace. When we finally received our food, the first thing I tried was the queso, and I was very disappointed. The consistency of the queso

was similar to refried beans rather than a smooth melted cheese. The queso might have been unsatisfactory, but the chips had just enough salt to make it taste good. For the main meal, the best part would have to be the rice. It had a hint of lime that made it taste great. For the steak, compared to Los Cabos, they didn’t nearly give me as much and it didn’t have as much flavor. Chipotle wasn’t amazing but it wasn’t terrible, so it earned 5/10.

Wynn – The Chipotle visit took unnecessarily longer than it should have, and the line seemed to move slow. In addition, the chips were over-salted and a few were soft. Chipotle’s queso, a new addition to the menu, was thick and creamy, but didn’t taste like queso. It resembled more of a microwaveable cheese sauce available at dollar stores or concession stands. The guacamole was basic,

similar to the guacamole at Los Cabos, but with a little too much onion. As for the main bowl, the meat had more spice than at Los Cabos, but it didn’t taste as natural, nor did it have a melt-in-your-mouth consistency. There also wasn’t as much meat in the bowl. The rice did have a little more taste, but the veggies weren’t quite as fresh-tasting although they certainly weren’t bad. Overall, Chipotle earned a questionable 6/10.

Considering experiences at both places, Los Cabos would be the preferred overall. It had better portions and more authentic flavors as compared to Chipotle, and for only $5 more. The total bill at Los Cabos was about $29 (without tip), and Chipotle totaled about $24. However, if you were only interested in the main meal, ignoring chips, guacamole, and queso, then Chipotle could be a more reasonable option.