Since McNicholas first opened its doors in 1951 as the first co-ed Catholic school in Cincinnati, the  world has changed drastically. However, when individuals from different decades shared  their experiences at McNick, one can see all Rockets, both past and present, are more alike than not.

“I came to McNick as a sophomore, which means I wasn’t part of the crowd,” said McNicholas Class of ’58 graduate Howard Pecquet. “I recall, my first day there was kind of depressing.” One of his first memories of the school was sitting on the bleachers in the gym with the class “nerd,” because they were the only two people who had no one else to talk with. For a while during his first year at McNick, Pecquet was incredibly angry at his situation, as he had been forced to move away from the childhood home that he loved, Atlanta, Georgia. “Things got better when I either demonstrated or was asked if I knew anything about electricity and about lighting,” he said. He then became a part of the stage crew in the theater program. “Once that occurred,” he said. “I was a part of McNicholas.” He worked on all of the musicals from his sophomore year to his senior year, and even once built a working windmill. Becoming involved in a project like the school musical helped him connect with other people, and eventually be elected as the senior class president. “I would like to suggest that younger people today try to be themselves, and not to be a model of what everyone seems to think is popular,” Pecquet said. 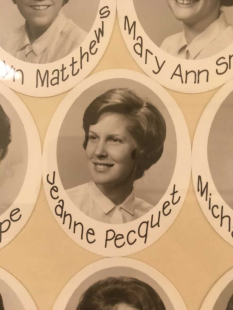 “I guess I worked every year [for the newspaper],” said Class of ’64 graduate Jeanne Pecquet Young. “But the last year I was a feature editor. Two of my really good friends were the editor and the assistant editor.” That year, the journalism room was in the convent, and, what is now The Milestone, was four sides of real paper pages. During her time at McNick, Young had the opportunity to travel to Chicago and attend different workshops on high school newspaper writing. “The flight to Chicago was my first flight,” she said. “One of the engines went out, so that was exciting.” Young has recently met with some of those high school friends, and even found herself going through old newspapers that she had saved. “Sometimes you stay in cliques,” Young said. “But when you go back to reunions, you always see people you kind of knew and think ‘Boy, they’re really great people. I wish I had known them better in high school’…you really should try to meet and be friends with as many different people as you can.”

“I was in a group called seminar which had twenty-five juniors and twenty-five seniors in it,” said Class of ’74 graduate Sam Roflow. “It was English, history, and religion all combined into one class.” Seminar was taught in what is now Upper Marian, or the religion hallway, by former social studies teacher John Kirchgassner. Through that class, Roflow was offered the opportunity to go on retreats at the Milford Retreat Center run by the Jesuits. “They were just a really great opportunity for some pretty powerful reflection time,” he said. Along with being inspired to become a teacher by a couple of his instructors at McNick, Roflow also had the life changing experience of meeting his wife, also a Rocket, and going on their first date at McNick. “[It] was December 14, 1973, of our senior year. We went to the talent show,” Roflow said. “Pick something that you love, and devote and commit to it. You know, really sink your roots into something. Don’t just scatter on the surface… There’s an awful lot of people that just scatter along the surface because they’re afraid that there might be something better somewhere.”

“My senior year the men’s soccer team won the state title, the men’s football team got beat for the state title, [and] the men’s basketball team got beat in the final four,” said Class of ’85 graduate Pat Stricker. One of his most vivid memories of his time at McNick was of the success of the sports teams, and how exciting it was to be taking part in the McNicholas community at that time. “I guess something that stands out from back then that is not available to you guys today is the making of the homecoming floats,” Stricker said. “The entire week leading up to homecoming basically was devoted to going to whoever’s house it was hosting the float that year, and taking part in building the float.” After graduating high school and moving through different stages of his life, Stricker’s advice to current Rockets is “Don’t be afraid of failure. The best way to learn from our mistakes is to make mistakes.”

“Our senior year we played [Roger Bacon] here… When I first started here, we didn’t even have home soccer matches,” said Class of ’94 graduate Jeff Hutchinson-Smyth. “So that was kind of a full circle in a way that I think students now are experiencing.” Roger Bacon’s men’s soccer team was, at the time, very dominate in the league, which created an “intra-league rivalry.” That year, they ended up beating Roger Bacon, which he said made all of the extra hours of training and conditioning feel worth the effort. He described the moment as “a beautiful swirl of what comes together when each person does their part and the end result is far more than any one person alone could achieve.” Hutchinson said he has “a lot” of advice for students, but “the biggest piece of it is how quickly this stage of life moves and knowing there are moments in mid-February when it’s eighteen degrees outside and you’ve got a lot to do…but I think from a ‘Carpe Diem’ perspective of ‘plucking the right fruit,’ just really enjoying, savoring this time of life, even if it’s the difficulties.” 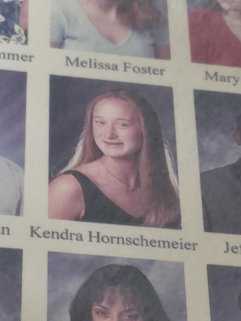 “A big event that happened for me and the school was when my team won the state championship for basketball,” said Class of ’01 graduate Kendra Lonneman. “I don’t think I realized how big of a deal it was until after it all happened.” Prior to the successful season of the women’s basketball team in 2001, Lonneman encountered support and congratulations from the “entire community.” Recognition for their winning season was so widespread that the team was even given a free dinner at the Precinct. “There’s so many stories of families going here and supporting us,” Lonneman said. All of her brothers and sisters, as well as her parents, attended McNicholas, and she had the privilege of sharing her experiences with the people who are closest to her. “Relax a little bit about the grades. There’s so much more. I know in the moment you want to do your best… but if it’s not exactly what you want, it’s okay.”

Through becoming involved in extracurricular activities, junior Anna Klug said she has met some of her best friends which was “pretty great.” Klug went from being a shy, quiet individual, to finding her voice amongst supportive, loving individuals. “Probably the best decision I made was joining marching band because if I hadn’t done that I would’ve sat alone every single day [during the summer].” Extracurricular allowed her to connect with her peers and embrace herself in her entirety. “Do something that you like to do,” Klug said. “Don’t worry about what other people think of you.”