A common staple of American culture and cuisine is the fast food industry. With different establishments drawing from different culinary types and styles, fast food can provide quick, easy, and diverse meals. However, can fast food beat a classic restaurant? Between a fast food stop and full-service restaurant, which has better taste, service, portions, and cost? To answer these questions, The Milestone sent staffers Faith Miller and Nicholas Wynn to find out. This month, they tested steakburgers at Steak ‘n Shake and Freddy’s Frozen Custard and Steakburgers. Steak ‘n Shake was considered a restaurant for this article because it is a full-service establishment with servers to take orders and serve the food. Freddy’s was considered fast food because it’s an order-at-the-counter establishment.

Located at 831 Clepper Lane near Eastgate 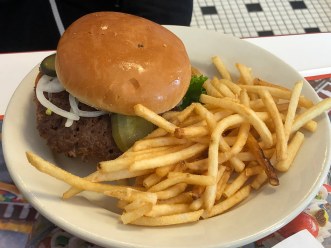 the food is there. However, the food wasn’t amazing, but was more below average. I had ordered the single steakburger ‘n fries, but I ended up receiving the original double ‘n cheese steakburger ‘n fries instead because of a mix-up in orders. So instead of getting my original order that cost $3.29, I ended up paying $3.99 for my new order. I didn’t really mind the price change since it is such a low price though. When I started eating my food, nothing struck me as great and that I would get this again. The taste just wasn’t really there and it was kind of generic. Depending on some people though, a positive would be that the steakburger patties were thick. For the fries, I tried some without anything on them, since that’s how they come. I didn’t notice anything special in the fries either, so I put their Steak ‘n Shake seasoning on the fries. Even with doing that, I still couldn’t taste any difference. Due to this, Steak ‘n Shake gets a 6/10.

Wynn – I haven’t been to a Steak ‘n Shake in a long time, but I know it’s a relatively popular restaurant so I was expecting a relatively good experience. Instead, it was strikingly subpar. To start, the service was fairly slow, at least slower than I was expecting it to be. Once we were able to order, I ordered fries and the original

steakburger with everything on it – cheese, lettuce, pickles, tomato, and onion with mayo and ketchup. While it wasn’t necessarily bad, it wasn’t really good either. The steakburger patty was on the smaller side, especially compared to Freddy’s. It also didn’t particularly taste like much of anything. It didn’t taste particularly seasoned in any way, nor was there any sort of naturally meaty steakburger taste there either. The fries had the same lack of taste. They didn’t taste naturally potato-y, nor like they had any sort of seasoning on them. I thought I’d try to add to the taste of my meal by adding some of the Steak ‘n Shake seasoning that was on the table, but that didn’t help any. That seasoning was just as tasteless, even a little on the bad side. The best part of my experience were the veggies on the steakburger; they were especially fresh and crisp. The price was also really cheap, with the steakburger only costing about $4. However, with the food quality being so inadequate, I wouldn’t have wanted to pay much more than this. Because my experience wasn’t great, but also wasn’t horrible, Steak ‘n Shake earns a 5/10.

Located at 3792 Waterford Parkway off of Beechmont in Amelia

Miller – The experience at Freddy’s was much better than at Steak ‘n Shake. I had ordered Freddy’s original double, which had two steakburger patties, cheese, mustard, 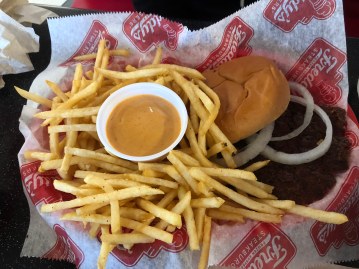 onion, and pickles and cost $7.89. When I received my order, I immediately noticed the large amount of fries I had gotten and that my steakburger required some assembly since it was a little messy. After putting it together, I realized how big the steakburger patties were. I was also surprised when seeing that the patty was thin, something that I preferred over Steak ‘n Shake. Compared to Steak ‘n Shake, the Freddy’s taste had a bunch of flavor. It wasn’t bland, and it made me want to actually go back. Instead of a signature seasoning that you can sprinkle on your fries or even the commonly used ketchup, Freddy’s has their own fry sauce, which is a blend of pickle juice, mayo, ketchup, and Freddy’s seasoning. This sauce is so much better than the Steak ‘n Shake seasoning and it has so much flavor to it. Because of the great taste of the food, Freddy’s deserves a 9/10.

Wynn – At Freddy’s, I ordered my steakburger combo California style, which includes cheese, onions, lettuce, tomato, and Freddy’s Sauce, and I added pickles. This steakburger had larger patties and they were a little thinner than those at Steak ‘n Shake, as

steakburger patties should be. They also had their own real and distinct taste, with enough meat flavor to be savory but not so much that it was overpowering. All the veggies were fresh, crisp, and piled on high. The fries had just enough seasoning to eat on their own, but they were made even better by Freddy’s Fry Sauce. The sauce was unique and tangy, an even better compliment for the fries than ketchup would have been. The cost of the combo was about $8, which may be a little on the expensive side for fast food, but wasn’t that inflated considering the excellent food quality. Overall, Freddy’s had that perfect American fast food taste, but was a little messier than it needed to be, so it earns a 9/10.

Overall, Freddy’s was definitely better than Steak ‘n Shake. There were better patties, more flavor in the steakburgers, and more unique fries at Freddy’s. While Steak ‘n shake was the cheaper option, the low price paled in comparison to the quality of the food.